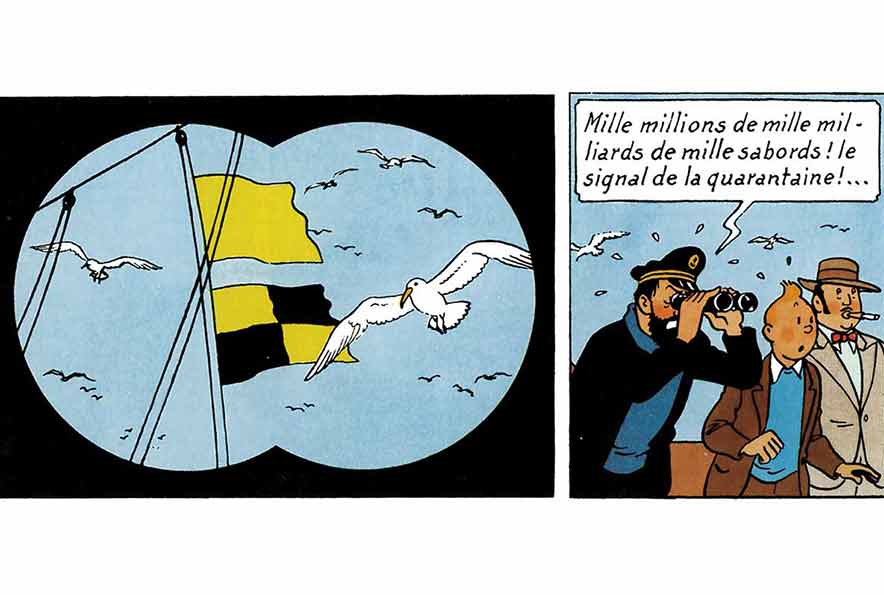 So there you have it, quarantine is back in style. Even though it is no longer required to fly the proper flags, namely the Q (Quebec) and L (Lima) flags, landing bans are now being imposed on ships approaching the Caribbean coast, in particular.

The principle of isolation has certainly existed since the dawn of time. Examples can be found very early in history, notably the Byzantine Emperor Justinian who enacted a law around 549 to isolate people arriving from plague-infested lands. China had also a well-established policy to detain plague-stricken sailors and foreign travelers who arrive in Chinese ports. But it was in 1348, in the midst of the Black Death that claimed nearly 25 million victims in Europe, that Venice established the first institutionalized system of quarantine, i.e. a ban on landings for 40 days (“Quarantaine” in French, from the Italian “Quaranta”, fourty).

As for the yellow flag, it seems that it was in England that it was designated to mark a quarantine. Flags have been known to be used since the Middle Ages to indicate ships in quarantine, but the first documented evidence of this dates back to the early 18th century, including Danish documents from the Great Plague of 1710, which indicate that ships carrying cases of plague were required to fly a white flag. The British, for their part, imposed the use of the yellow flag (the “yellow jack”) as early as 1789, under penalty of a fine of 200 pounds. There also appears to have been mention in documents from Split in 1580 of a Bandera della Sanitaria imposed at that time in the ports of the Adriatic.

More recently, the yellow flag means rather the request for “free pratique”, that is to say precisely the sign that the ship is healthy and requests a visit from the port authorities to obtain the right to enter the port. Those who sail in the Channel Islands certainly remember that it was still customary not so long ago to display it when arriving in the ports of these islands. And it is the Lima flag that indicates, when raised in port, that the ship is in quarantine (at sea, it instead obliges the recipient to stop immediately).